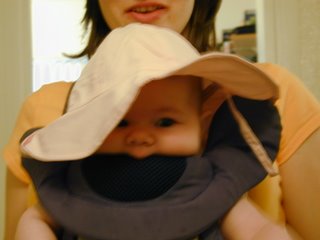 We took a great walk Sunday evening, and Naomi seemed to enjoy seeing the cacti, the trees, more cacti, bouncing a bit in the chest carrier, and seeing more cacti. There was a beautiful sunset and it was actually cool enough to be outside. We think Naomi tried to eat a bug but ended up coughing it up.

I haven't figured out yet how to get the sun hat to stay on without tipping over the front of her face, but I'll catch on sooner or later. (Yes, I know the ties aren't tied in the picture.) Matt liked the rakish tilt of the hat - I think he thought it made her look like a woman of mystery. 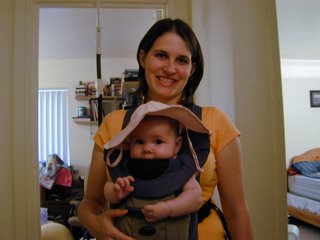 Notice Naomi's top lip hanging out over the chin support. She slurps away on that thing like crazy. It's pretty disgusting, but she's happy doing it.
Posted by Val at 10:39 AM