As you may have discerned from the text in previous posts, we are upgrading from a family of four to a family of five!!

This little tyke is due August 21, and I am currently 22 weeks pregnant. Here are pictures from the 20 week ultrasound. 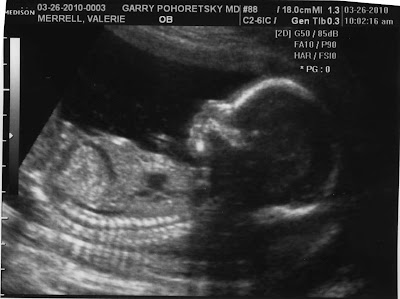 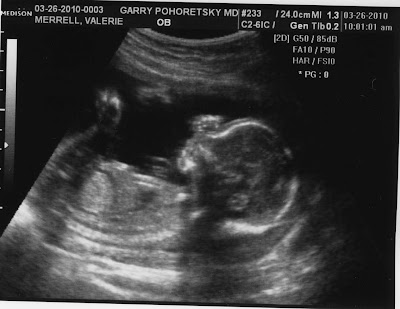 We're big on high fives in this family. 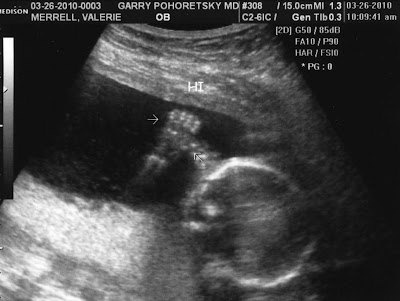 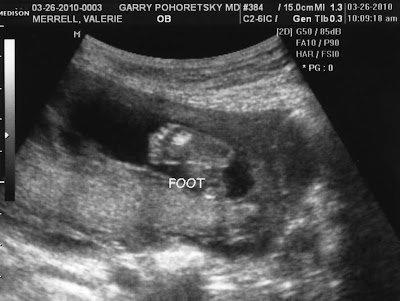 In case you're wondering, we did not and will not be finding out if it's a boy or girl until the baby is born. So we are in suspense, just like everyone else!
Posted by Val at 9:41 AM 2 comments:

This morning, Gabe was a bit screechy. After awhile of trying to gently redirect his behavior, I put him in time out in his crib. A few minutes later, I heard a crash and some crying. I assumed he had thrown his books against the wall and was crying to get out. I took my time getting in there, and THIS is what his bed looked like.

Yeah, that's blood.
And he was standing over it with blood covering the lower third of his face.

The blood had also dripped off the crib slats and was covering a bigger-than-my-hand spot on the carpet below. 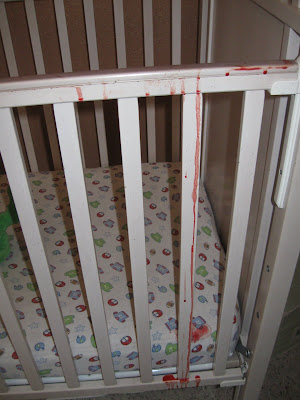 I took him to the kitchen where I crushed some ice and put it in a cup. Once he saw me getting out the ice, he calmed right down. Hopefully he doesn't do these things to get crushed ice!!! I am happy to provide it at times he's not injured, too!

Here he is munching on crushed ice, happy as a clam. I slowly wiped him up and then left the kids to enjoy their ice while I tackled cleaning the room. 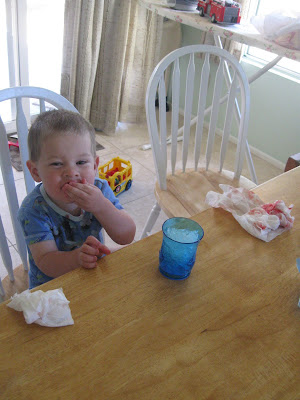 The cleanup wipes and Gabe's pajama. I should have included my shirt, too. It required a fair bit of attention to make sure it didn't stain, too. 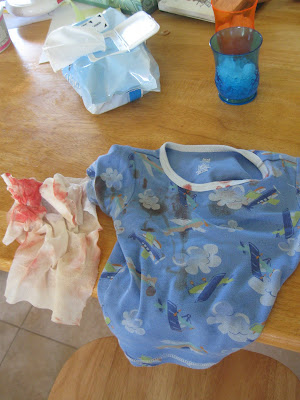 I think he cut or bit his tongue somehow, since I can see a cut up pretty high on his tongue. I have NO IDEA how he did it, though.

Naomi never did this. Gabe has a split lip, bloody mouth, or nasty skinned knee weekly. Hopefully he masters the moves he's working on and can market them later on as a stuntman. Then at least all this blood and craziness will be building up to something productive!
Posted by Val at 5:36 PM 3 comments:

Naomi needed some skirts to wear this summer, so I started with this one. This is the first time I've done a tiered skirt, and it was simple and fun. The hardest part is picking out the material...I have a hard time envisioning possibilities! I'll post a picture of her other skirt (not a tiered one) when she wears it. 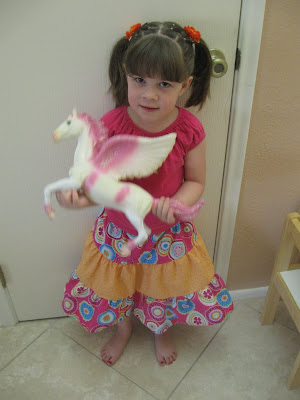 I suppose this isn't really a "creation", but I was very tired of Gabe's hair looking long and unkempt. I was also tired of shelling out money at a hair cutting salon for his hair to be trimmed. So I decided to experiment with Matt's clippers. This time around I just used the 4 all over; now that I know how that looks, I can adjust for next time.

Here were my tactics:
...stools
...in the bathroom
...a movie playing on the tv right outside the bathroom door
...suckers
...speed 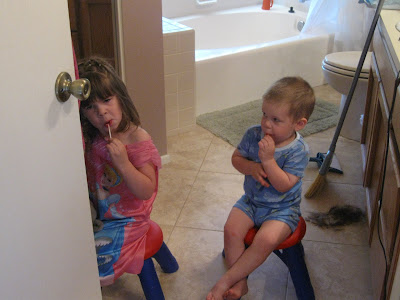 Check out this mop of hair that used to be attached to Gabe's head! 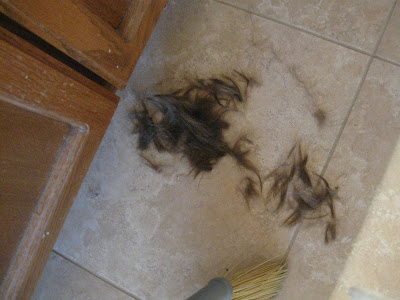 They were good sports. 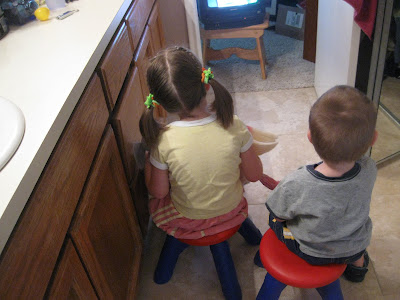 Apparently the sucker wasn't enough, and Gabe had to eat part of the stick too. 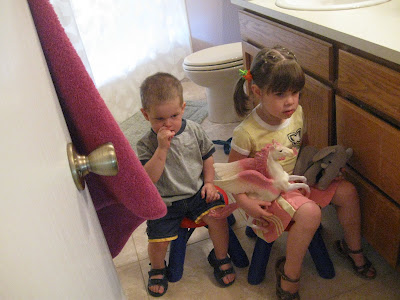 Stuff about Me (Tagged!)

I got tagged awhile ago by JD's wife Sarah (JD is my cousin on my mom's side). I don't think I've ever followed up on being tagged prior to this, but here goes! Here are things about me in groups of 4.

4 shows I like to watch (well, we don't have any channels right now. But when we did, these were my shows):

3. So You Think You Can Dance (my favorite dance is the krumping, which Matt finds hilarious since I'm a little white girl from the sticks who has no rhythm!)

4. ....hmmmm, something from the History or National Geographic Channel

4 things I have learned from the past:

4 things I did yesterday:

4 things I love about winter:

Trip to a cabin!

In late March, we spent a few days at a cabin with the Mumfords and Angie (I would say the Whitakers, except Richie was home studying like crazy for his orals, which he successfully completed!).

For the 4-hour drive, we packed Angie and Mylie into our van. Gabe and Naomi were relegated to the back seat, which they loved so much that their carseats are still back there (and we've been home two weeks!). Here's a picture of Mylie, Naomi and Gabe on the return drive. Serious thanks to Angie for pulling crying control duty! 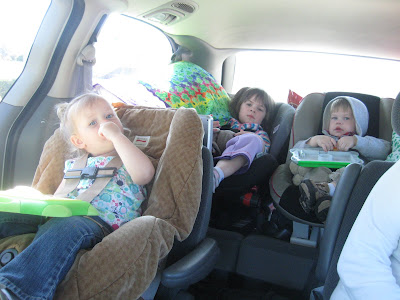 The cabin where we stayed...we actually only saw it from this angle on the last day we were there, when we were playing in a snow fort (pictured later). 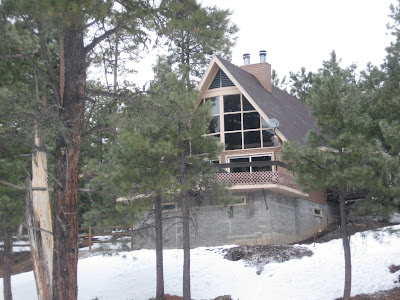 Sledding was one of my favorite parts of the trip. My kids, especially Gabe, LOVED it! I really loved going down with him time and again. (I actually haven't been sledding in years, so I may admittedly been having as much fun as Gabe...) 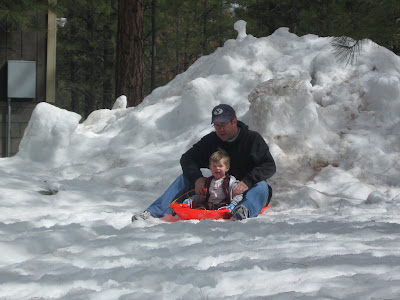 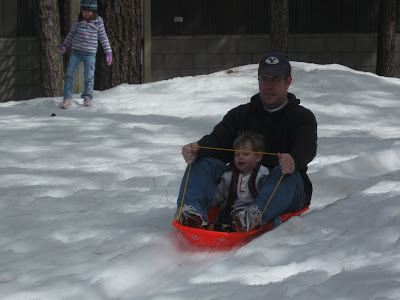 Not being well versed in appropriate snow behavior (we do live in Tucson, after all), Naomi didn't understand until too late why she shouldn't sit directly in the snow for long periods of time. 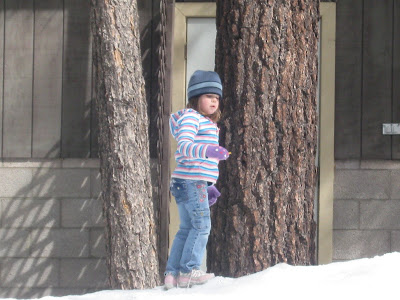 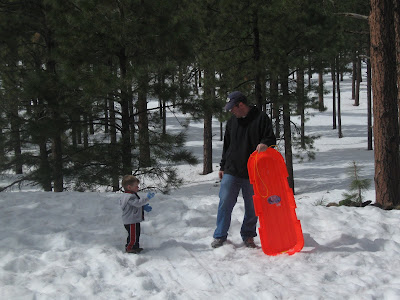 There was a random snow...bowl? It was probably created by the people in the cabin before us, and we trooped down to check it out on our last day. It was actually kinda hard to get to it; I put Naomi and Gabe in a sled and pulled them down to it. I broke through the snow about knee-deep every other step or so!

See the yucky snow on the sides and the bottom? Yep, Gabe is munching on some of that. I couldn't keep the dirty snow out of his mouth all three days! 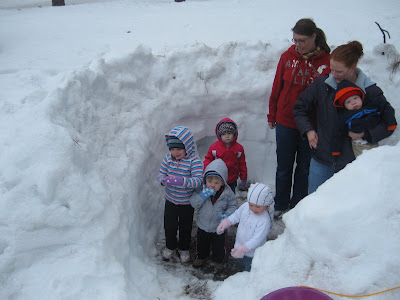 The kids actually looking at the camera at the same time...Brooklyn is in the red coat, and Mylie is modeling that awesome doo-rag. (Being a spelling fanatic, I actually googled that term to make sure I wasn't spelling it incorrectly.) 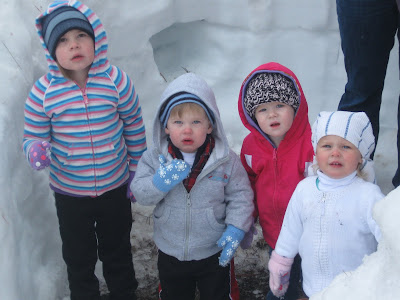 On the way back up the hill; all four on the sled did not last for long. 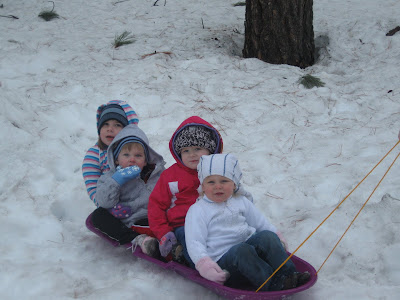 We had a terrific time with lots of laughing, a couple people falling down the spiral staircase (luckily it was just adults who fell and not kids!), fun in the snow and fun playing games.
What a terrific vacation!
Posted by Val at 9:35 PM 2 comments:

Merrell Family
(captured by the timer on our camera -
thanks for going to the effort of setting up the tripod, Matt!!) 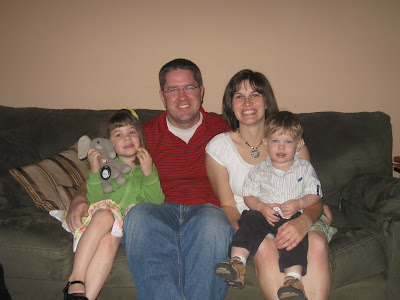 Slave labor.
Probably due to the spray bottle, Naomi's favorite cleaning chore
is to help wash the bathroom mirrors. 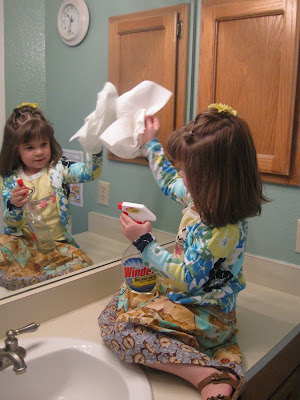 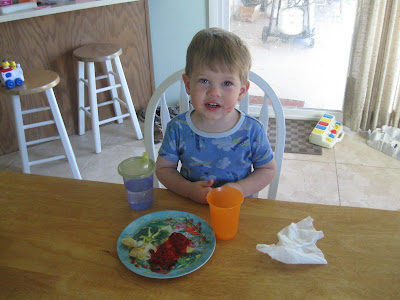 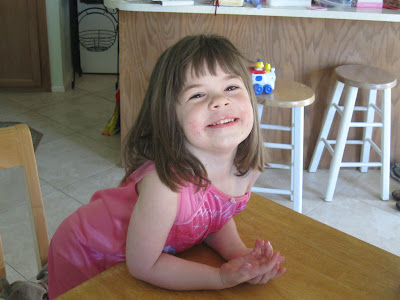 Naomi's friend Keira visited from Maryland, and
we were thrilled to see her a few times during her visit! 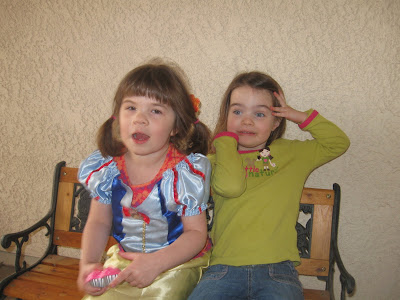 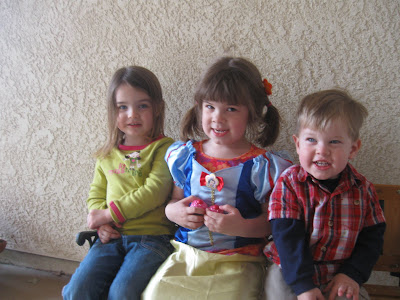 Here is my friend Jenny (Keira's mom). I was so happy to see her and so sad when she left!
This picture was taken by Naomi - you can see Jenny looking elsewhere, since Keira was taking an identical picture at the same time! 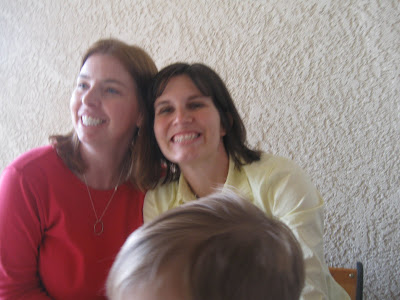 The girls played a bit with Naomi's as-of-yet unfinished puppet theater. Here they were actually sticking the puppets out the viewing window and all the way over the top of the theater. 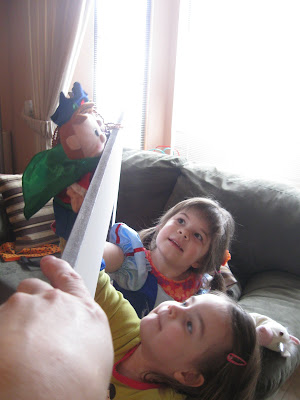 March was GREAT. We have more pictures from March to add...this is it for now, though!
Posted by Val at 4:54 PM No comments: