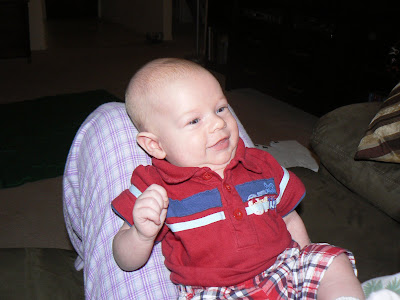 Gabriel is one dang good-lookin' kid, especially when he smiles! I LOVE when he smiles. It's this big goofy expression on his face, and you can see the smile in his eyes, too. Unfortunately, he specializes in retracting his smile as soon as the camera appears, so this is the best we have done so far in capturing the smiles.
Posted by Val at 9:44 AM 1 comment:

Last Tuesday was National Root Beer. So we had a party! I took a picture of the preparation beforehand. We put out sample cups with different kinds of root beer to see how many people could differentiate between 6 brands. Schuyler and Ryan Whitaker blew everyone else away by both getting 3 correct. I, sadly, only got one.

We ended the night with root beer floats. Thanks for coming, everyone! 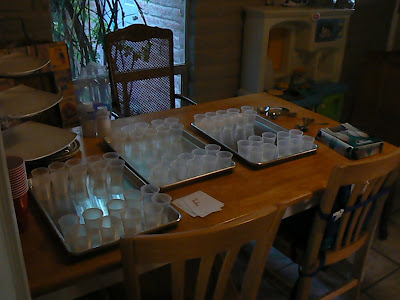 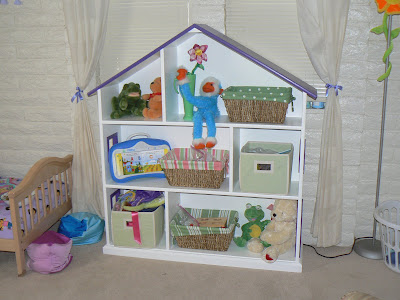 Grandpa Jones made this dollhouse bookcase for Naomi, and she loves it! Thanks, Dad! It even has windows and doors on the sides.
Posted by Val at 9:27 AM No comments:

The combination of those two facts made life quite uncomfortable for awhile! Luckily we were able to hang out at the houses of some friends so we didn't sweat into little puddles on the ground. While we were at home, we stayed directly in front of the fan. You can get pretty creative with a deck of cards and a bit of unused tubing from a portable AC unit when you're sitting in front of a fan... 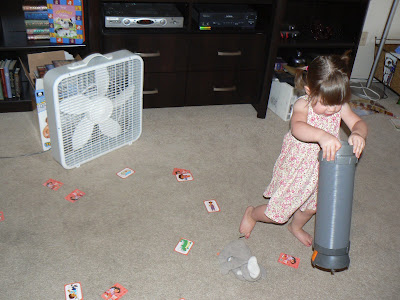 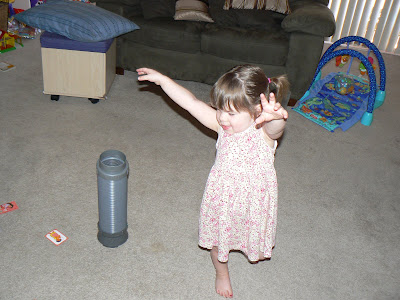 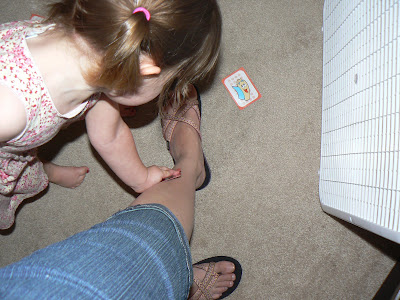 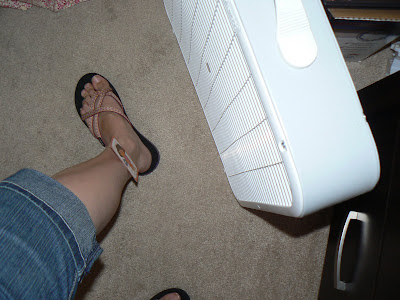 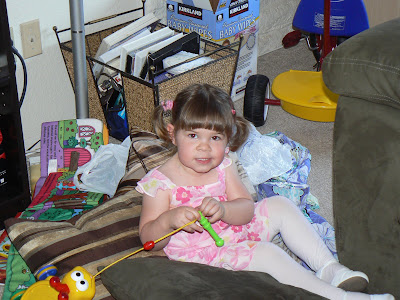 Naomi caught a case of the stomach gurgles. It's no fun being sick, but it's distressing to see your child sick and not being able to explain why it's happening or what's going on. Or that there's no medicine to help.

Naomi appeared in our bedroom Monday morning around 2:00 am and spent the majority of Monday throwing up and having other unpleasant symptoms. She threw up 10 times between 2 AM and 10 AM, so we were worried about her being dehydrated. She was able to start eating popsicles and Gatorade mid-day, and it was all uphill from there. We have our chipper little girl back this morning! Unfortunately, she was hopping around at 5 AM, and I wasn't ready for such exuberance at that hour...

1. While in the waiting room at the doctor's office, in one shot Naomi threw up all over me, the check in counter, my wallet, cell phone, and straight into the opening of the diaper bag. Everything I pulled out of the bag afterwards was covered in goo.

2. I understood what my parents felt like being literally covered in my throw up. However, despite their knowledge of my extreme motion sickness issues, they continued to stick me in a car and drive to places like Iowa and California. So they at least knew to expect it.

(Picture above is a random one, not one while Naomi was sick. We were too busy wiping the vomit from everything to take pictures!)
Posted by Val at 1:26 PM 4 comments: