Overall family update: we're moving to ATLANTA!!! Matt will be doing his post-doc at Emory University, and we are very excited to move onto this next stage of life! We do not yet have a set date for when we'll be leaving Tucson, but it currently looks like it may be in October (definitely not sooner).

Gabe: his bed has been moved into Naomi's room, turning it into the "big kid room". This transition has actually gone fairly well! He tends to stay awake longer at night and sings pretty loudly, but Naomi apparently is skilled at ignoring him and she conks right out at bedtime.

Naomi: she's counting the days until school starts again, and hopefully dance, too! Our social child accosts pretty much everybody on the street, telling them her name, age, and usually at least one other random fact or story (and it's almost always something they will find completely uninteresting!).

Val: 37 weeks pregnant and getting lots of comments about summer pregnancy in AZ! Besides the comments, I did get a compliment the other day while exercising at the gym (they were impressed I was still exercising at this point in my pregnancy). Little did they know that besides having the benefit of feeling MUCH better after exercising, going to the gym also provides an air-conditioned indoor play activity for my children. :) That's a pretty good incentive around here!

Matt: working hard at the lab here at the University of Arizona. Playing soccer on Fridays, although the season just ended. Keeps busy with projects and tasks thrust on him by Val.
Posted by Val at 3:15 AM 1 comment:

Face painting and the rain!

With the heat, we needed some distraction. SO...we dug out the face painting crayons we had recently purchased and gave them a try! 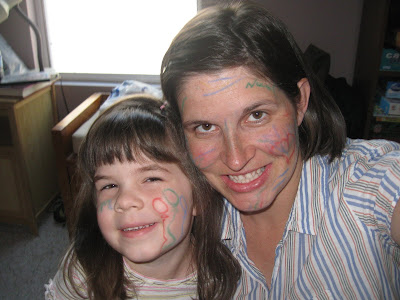 And then we lucked out and got some rain! 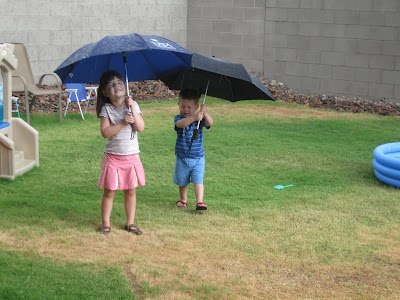 While Naomi and Gabe sang and danced with umbrellas,
Matt grilled us up some yummy dinner. Hamburgers, bratwursts, and pineapple. (The kids, having a less developed sense of taste, preferred microwaved hot dogs.) 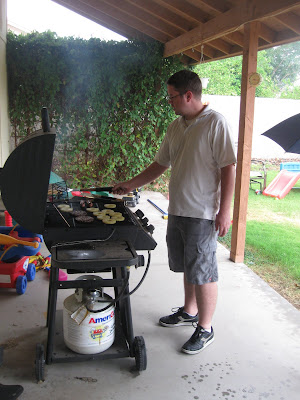 We've been waiting for this event for awhile! (Well, I have...I didn't tell the kids until this morning that we would be meeting Clifford, the BIG RED DOG!!)

The kids got to color some Clifford-themed pictures before storytime, then we listened to some Clifford books being read. 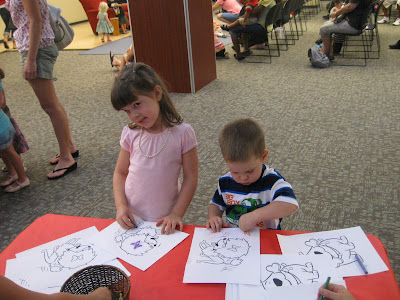 After marching around the bookstore in a parade, we got red balloons and waited in line to meet that most fabulous of all big red dogs!! 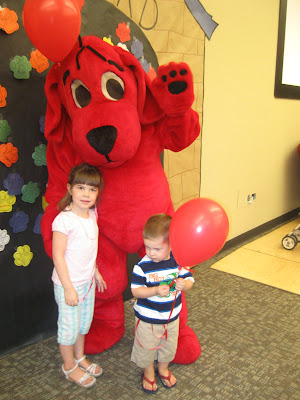