Some friends on Facebook requested pictures of chore charts I just barely made for the kids. Since I was uploading them anyway, I decided to stick them on here also. We're starting slowly with small "chores" (ie normal daily tasks) to get them used to it. Then the hard labor will start. Hehe. 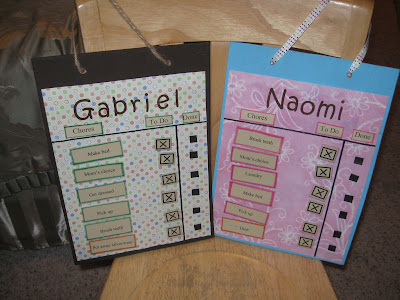 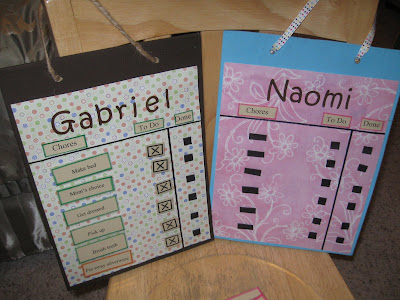 Gabriel has opted to no longer nap. We (the parents) have fought hard the last few days to get him to nap, but it hasn't happened this week. SO...perhaps it's time to give up the fight.
Here's a picture from yesterday, when Matt told Gabe that if he laid on the couch for 5 minutes with his eyes closed, he could watch a movie. This is his version of "eyes closed". Cheeseball. 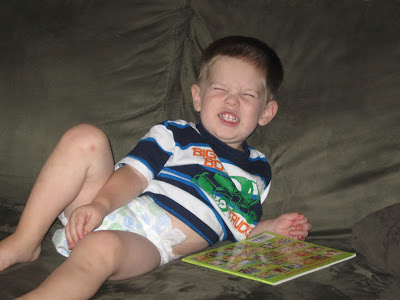 Today we didn't even attempt to have him nap. He had quiet time for a bit and then continued on with his day. This is our non-napping child at dinner-time. 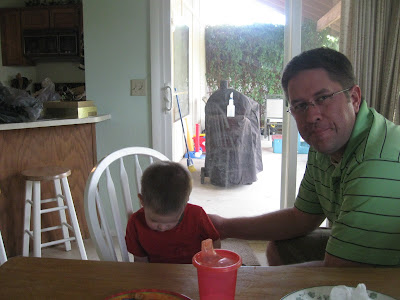 And another shot...he was completely asleep and wobbling all over. It was hilarious! 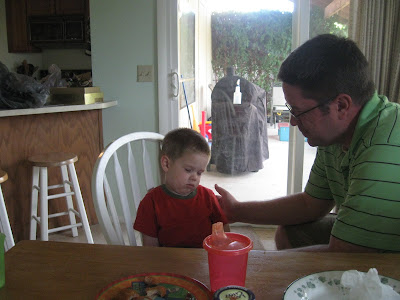 BUT...it makes me think that he is NOT ready to stop napping.
Posted by Val at 8:02 PM 2 comments:

For those interested in the details, Val is still pregnant. The original due date was August 14 (which you will note has come and gone). At the 10-week ultrasound, they pushed the due date to August 21 (which is not approaching fast enough). We are very ready to have this baby!

We do not know if it's a boy or girl.
Naomi is adamant it's a girl and Gabe is just as adamant that it's a boy.

At a doctor's appointment today, Val was told she is dilated to a three. She is hoping this baby makes an appearance ASAP. If you want to see a picture of the belly, check out the zoo post below.
Posted by Bear at 6:56 PM 1 comment:

Trip to the Zoo

We had another not-so-hot morning, so we took a family trip to the zoo! 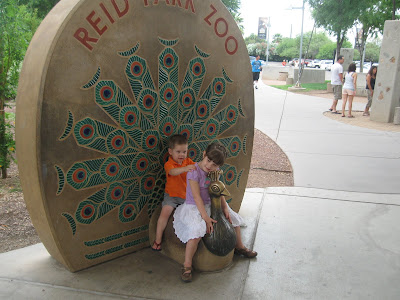 Gabe was thrilled with the peacocks this time around and basically chased one around for quite some time. Naomi was more reserved and kept cautioning Gabe to not get too close. 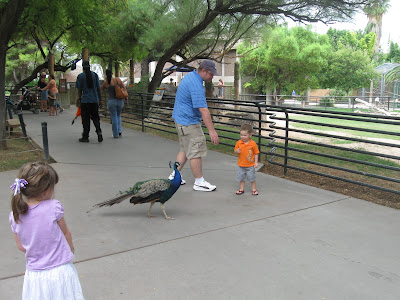 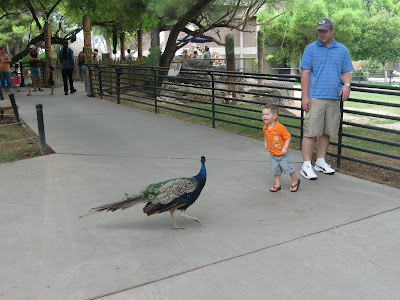 We happened to reach the children's learning center when they were having a storytime (didn't even know they did storytimes there!) about snakes. We cooled off from the heat, listened to snake stories, and even got to touch a ball constrictor. 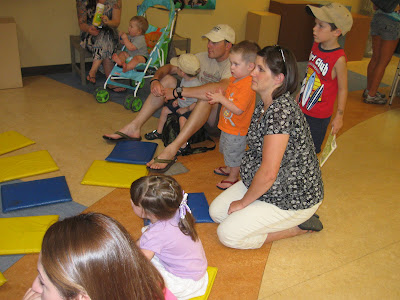 The ball constrictor's name was Ted. 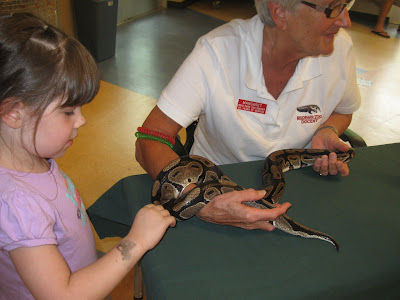 Both kids touched him without urging. In fact, the picture below is of Gabe's second round petting the snake because the camera wasn't handy the first time around. 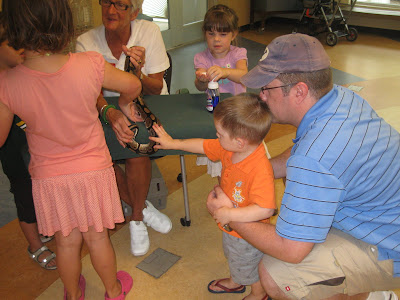 Naomi started preschool last week, and she is loving it! Last year she went to an in-home preschool with a class size of 5 kids and just two days a week. Now she's in a larger class and goes three days a week.
We forgot to snap some pictures before heading out the door in the morning. So here's one of us entering the building! 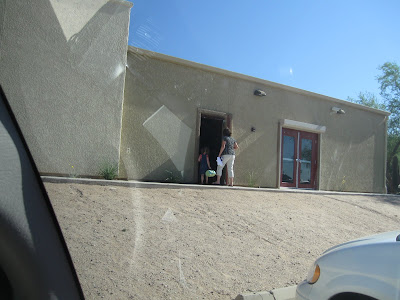 Naomi immediately found her chair and started playing with playdough while I dashed outside to get the camera. 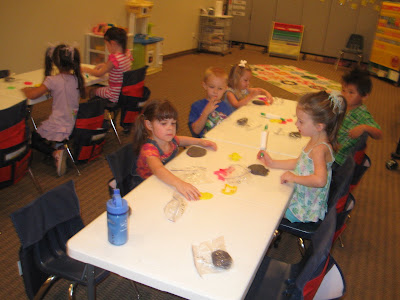 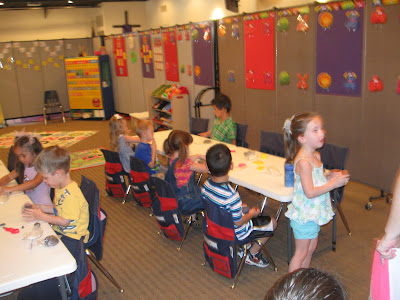 And this is when she let me pull her away from the playdough fun to pose by a wall. 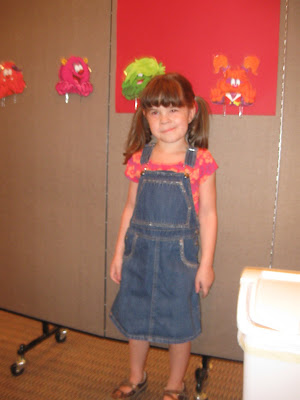 Fuzzy pictures, but at least we got a little documentation on the big occasion!!
Posted by Val at 3:42 PM 1 comment:

July and August are supposed to be monsoon season here in Arizona. And somehow...it doesn't seem to have come this year! We've gotten a few storms, but mostly they have petered out before they got to our area OR they completely jumped over us.

Here are Matt and the kids watching one of the few storms we HAVE gotten out the kids' bedroom window. There was some great lightning that night. 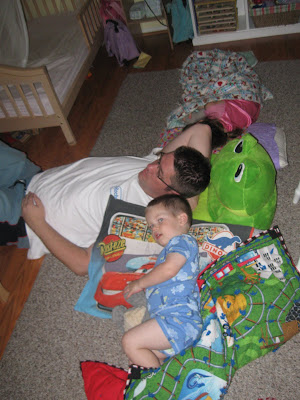 And onto the miscellaneous pics... 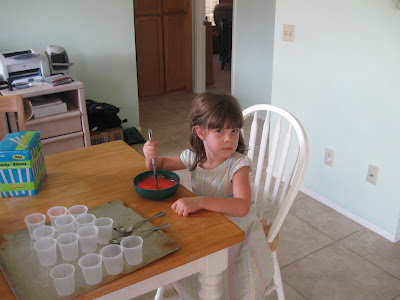 Gabe and Eli scaling the bars at the zoo...this was an unexpected treat since the weather was quite a bit cooler than usual one morning, and so we visited the zoo with some friends! Unfortunately, Naomi got three fingers squished in a door and didn't calm down for awhile, so we made a hasty departure. 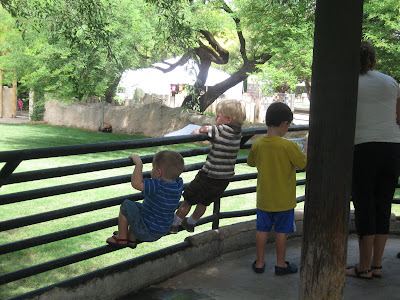 Gabriel showing one of his many bonks...this kid gets them ALL the time! 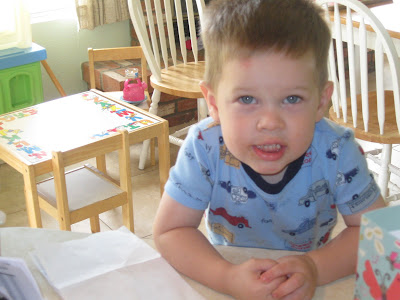 And I always love reading pictures! 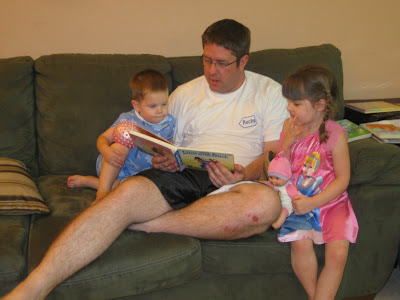 We love Chik-fil-A!
The food is inexpensive and of much better quality than other "cheap chicken" places we've tried. It's clean. And there is a cow present on a weekly basis which will put up with Naomi wanting to dance with it. A win-win for the whole family!
Cow Appreciation Day is a huge event at our house. The kids were excited to plan their costumes, helped cut out the spots (this year we just taped cow spots to their clothes instead of drawing the spots on), and they actually LEFT their spots on while we were in the restaurant. You would be amazed at how much excitement is generated by asking a 2 and 4 year old if they are ready to dress up like a cow! 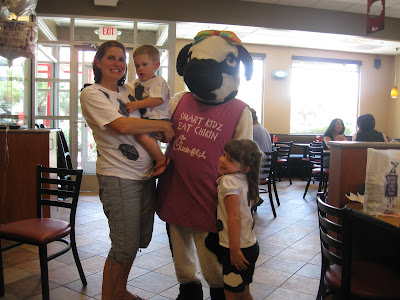 Here we are, with the cow! (This is the girl version.) Since Matt wasn't interested in dressing up in spots, we went for lunch. Gabe also sported a cape, which isn't shown in the picture above. 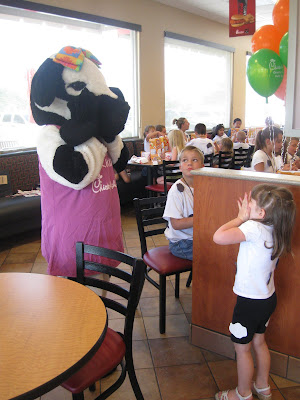 And here you see Naomi's excitement at hanging out with the cow. Naomi followed it around and tried to distract it from playing with anyone else in the place.

When I was at the cash register, I heard employees talking about me. They were trying to decide if I qualified for just a sandwich or if I should get a whole meal (must be dressed head to toe in cow apparel to get a meal). They decided that, since I was wearing black and white flip flops, that counted. Plus I heard them say something along the lines of me being hugely pregnant and probably needing some beverage refreshment on a hot day. Haha!!
Posted by Val at 3:03 PM 2 comments: