An exersaucer and an octopus... 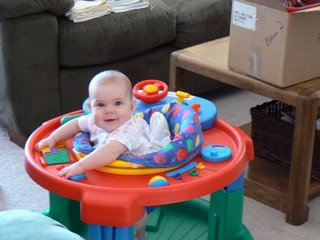 Naomi has some new forms of entertainment, one of them being her exersaucer. There are so many knobs to turn and handles to pull, etc., that her busy little hands just can't get enough of it! 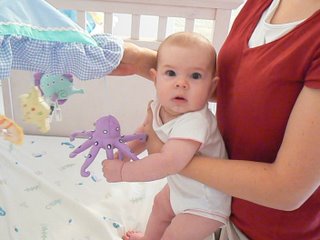 And then there's the octopus...as I mentioned in a previous post, Naomi loves to capture the octopus as the mobile spins around, and then she proceeds to slobber all over it and munches on each individual tentacle. Watching her catch the octopus in her outstretched arms is one of the day's delights. Her whole body seems to quiver with anticipation, or perhaps with the effort of ensnaring the moving target. She loves that octopus so much that we ordered a Beanie Baby octopus and are awaiting its delivery with much anticipation. (Then I can stop trying to prevent her from tearing this octopus right off of the mobile!)
Posted by Val at 12:40 PM

Glad you found a Beanie Baby octupus for Naomi. Is it as cute as the purple one? Maybe it's the color she goes for, who knows? Guess you will find out when the octupus arrives!~