Do you like this picture of Naomi? She's such a cutie, huh? Well, let me tell you some things about this cutie... 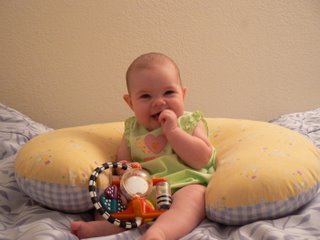 We're having some issues with sleep patterns in our house. To be more precise, I do not approve of Naomi's late hours. She was staying up until 10:30 or 11:00 PM and sleeping in until 9:00 AM. I tried getting her up earlier in the morning, hoping her whole schedule would get moved a couple hours earlier. I believe the phrase "the plan backfired" completely fits here. Apparently it was much too logical to actually work.

The first day I got her up earlier in the morning, Naomi went to bed even later than usual that night and got up at 4 AM or something like that. I tried it a couple mornings and didn't really get much response. So I let that die out and figured I would just have to survive this late bedtime until she's old enough that I can do something about it.

Unfortunately, Naomi's sleeping pattern did shift, but not the way I wanted!! She has started going to bed after midnight and sleeping in until 10:30 or so. I'm not a night owl, so this is a huge struggle for me, especially when I read that the optimal bedtime for babies is between 7 and 8 PM. Basically I go to bed around 11:30 and Matt has duty the rest of the time until she gets to sleep. ARGH.

IF YOU HAVE ANY ADVICE, MAKE SURE TO PASS IT ALONG. You may be responsible for keeping my sanity intact (what remains of it, that is).

It's a darn good thing she gives such huge smiles when she wakes up. She makes me laugh, melts my heart, and is probably consciously manipulating me so I will continue to allow her late-night schedule. Silly girl.
Posted by Val at 10:54 AM

It's kind of hard to do it now, but try to wear her out and use up her energy about 1/2 hour before bed, then give her a nice warm bath. They have some new Lavender bath stuff (a few of my friends really swear by it). Wrap her up in a blanket and cuddle her/rock her with the lights down low, and soft music in the background. Make sure that her room temp is 68-70 degrees (if possible), as this is optimal sleeping temperature for babies (actually most humans in general prefer this temp range).

Just try to think of her as a leader rather than a follower! LOL! Setting her own hours may just be the beginning, although I don't want to discourage you from having other babies!! Since all 6 of my kids went to sleep at night before 10 PM, I don't know how to train them NOT to stay up! Maybe the house being dark and quiet discouraged it, I don't know? I liked Bethany's advice. Keep trying!