Testing the waters and pushing the limits already! 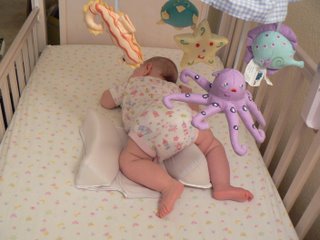 When we put Naomi in her crib to sleep, we always put her on her back...up until last Friday, that is. In accordance with the "Back to Sleep" campaign, you're not supposed to put babies on their tummies to sleep. Once Naomi learned to roll over, we put wedges on both sides of her to keep her from rolling. That worked great for awhile!

Naomi eventually learned how to work around the wedges and still get onto her tummy. Sometimes she would scootch far enough up and kick the wedges down so that the wedges would end up on the opposite side of the crib from her. Last week she decided to really let me know exactly what she thought of me putting her in those wedges: she didn't get out of them like she normally would, she just slept right on top of them. (See picture 1). I can't decide if it was a defiant act or if she's already conquering everything that's in her way!

So we took the wedges away and started putting her on her back in the middle of the crib. It only takes about 20 seconds before she rolls over to her tummy, so she's now a tummy sleeper. She does tend to move herself around with those legs, though, and occasionally she'll stick an arm or a leg through the bars. (We are considering the bumper pad options to see what would work best to prevent her from injuring herself by sticking something through the slats and then twisting really hard.)

Sometimes she'll get her knees under her and they don't slide out. (See picture 2). That's a pretty dang cute sleeping position! I'm not exactly sure why it's comfortable, but I've noticed lots of tots seem to enjoy it. 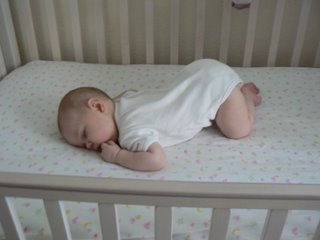