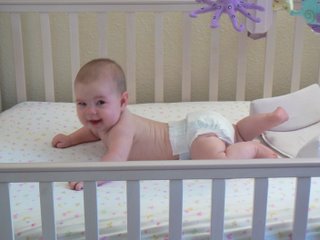 Naomi is 5 months old today and she is doing great! She is propping up well as you can see from the picture. (Normally I don't leave her in just a diaper, but after two clothes changes due to spitting up and one clothes change due to oozing green poop, I felt a preemptive strike against cleaning more clothes was in order.)

1. Doorknobs and locks: they are shiny, on both sides of the door, and they move!! She can stare at them for longer than Mommy wants to stand by the door, and she's just started grabbing them.

2. The roll of paper towels on the counter which are still in the package: a great toy for Naomi! It crinkles (which she loves), it's soft (so when she pushes it over on her foot it's not a big deal), it rolls around, and it's almost bigger than she is! When she tries to pick it up, it's more like she's hugging it than anything else.

3. Grabbing things with her hands: for the last couple weeks, Naomi would stretch out her arms and then move them together in front of her in a circular motion, gathering up whatever happened to be in her reach in the process. In the last couple days, though, she has started shooting her arm directly at what she wants instead of trying to sweep it up. I love it!

4. Octopus tentacles: Naomi loves the octopus on her sea-life mobile. (I have to admit I'm a bit partial to it, too.) At first when we would stand her up in the crib and let her watch the mobile turn, she was pretty tentative and needed encouragement to see that her hands could interact with the toys. Now she uses her whole body to lunge towards the toys! She definitely favors the octopus, though. Her arms will reach out for it, and if she misses it, her whole body turns to watch it move away from her, and then she sees it coming around again and twists her body to watch it approach.

5. Tummy time: we have been doing lots more tummy time per the doctor's orders, and it really shows. Naomi is now much more comfortable on her tummy, and she can hang out there for quite awhile. (Of course, if my mom did crazy things to keep me entertained when I was on my tummy, I'd stay there just to see how long she would keep going and what she would come up with next!) When she gets tired of propping up and seeing things, she puts her upper body on the blanket and starts pushing up with her feet. Every once in awhile, her feet or knees will catch. Then she either lunges forward (scraping along on her face!) or her bum goes way up in the air.

6. Sitting! Naomi can't sit up all by herself, but she's needing less support by the minute.
Posted by Val at 12:47 PM

I'll say it again--she's adorable and getting so big!!

I guess I'll have to say this again, too. This is from Grandma Debbie.

The facination with door knobs doesn't get better as she gets older. You just don't have to hold her up anymore.

Wow, she's doing Great with holding her head up compared to a couple of weeks ago! Good job, Naomi! (And parents who are so patient and loving and help you out a LOT!) Love, Grandpa and Grandma Jone

Val, you're such an observant, encouraging mother. I love the obvious delight you take in Naomi and your witty observations about her progress.

Keep up the good work!