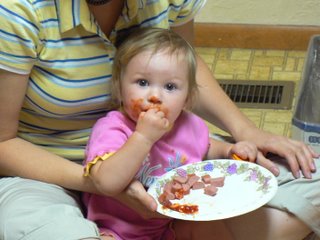 On Saturday (July 1), Bethany, Dahlia, and Bobbie joined us at Kenny and Echo's for some food, fun, and fireworks. Kenny cooked shredded BBQ beef with just the right amount of garlic, and the girls ate hot dogs (or in Bobbie's case, large handfuls of ketchup). We spent some time playing outside in the grass, which was a nice change from Tucson. (WHAT?? GRASS? And playing outside during the afternoon? It may only be 12 hours south, but it's a whole different world!) 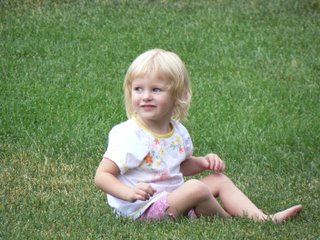 Later that evening we pulled out the fireworks. Sadly enough, there were a bunch of duds in the package, but we got in a few fun ones and later on watched the professional fireworks from the Stadium of Fire. 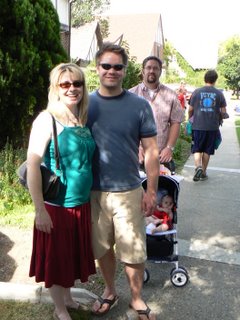 On Tuesday morning, we watched a good portion of the Provo parade. Some were coerced into going, but we all ended up enjoying it. It was a bit more fun having a local (Echo) to give us details on the bands from the various high schools and other such info.
Posted by Val at 9:02 AM

This must be why I, who normally LOVE to hold the Grandkids, like to have them on their parents laps during the meals!

Echo is looking pregnant - how exciting for them!

Ketchup, the 5th food group. Besides why waste time putting it on other stuff, when you can eat it straight off the plate.